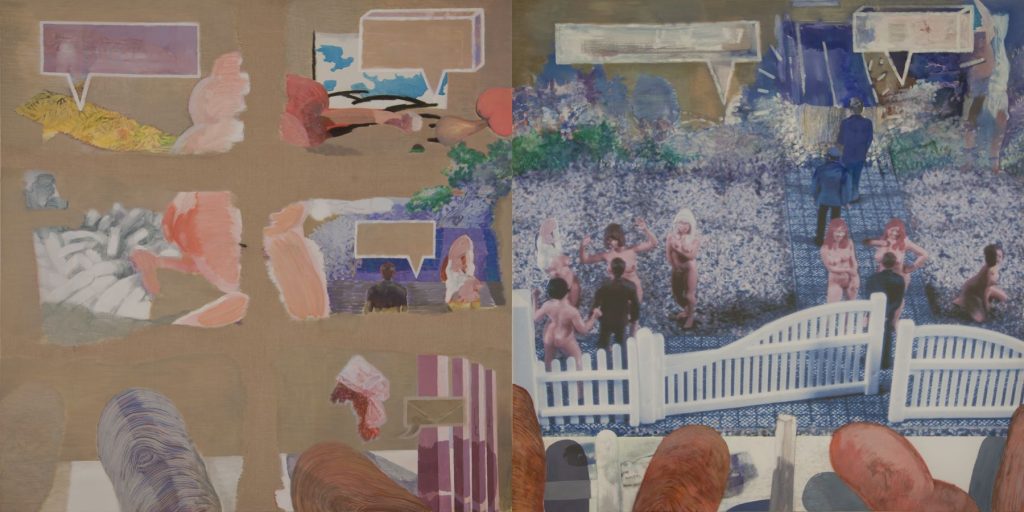 After The Garden of Earthly Delights, painted by Hieronymus Bosch, historians are divided as to whether the triptych’s central panel is a moral warning or a panorama of paradise lost. Some people have great ideas about paradise and act on them, like the man who committed the first political assassination in 300 years in the Netherlands by killing Dutch politician Pim Fortuyn.

Looking down from an open window into a front garden with a white gate, you’re clearly put in a personal and private setting and you inevitably become a voyeur. You witness a meeting of an important man, assisted by a policeman, with another person not yet visible. Nude women manage to keep other security personnel at a distance. These features relate to The Garden of Earthly Delights but it gradually starts falling apart due to an invisible leader, too much misunderstanding, too many voices coming from too many directions. Conversation bubbles either say all conversations, opinions and ideas are useless, or that the positive ideas and solutions have yet to be imagined.

When it turned out Fortuyn was killed by a crazed Dutch environmental activist the impact became no less confusing. The unfortunate politician, openly gay and rebelling against the political establishment, had radical ideas about the course of the country. He provoked controversy with his outspoken views about multiculturalism, immigration and Islam. After his death political amateurs going after their own personal interests tore his LPF party to pieces.