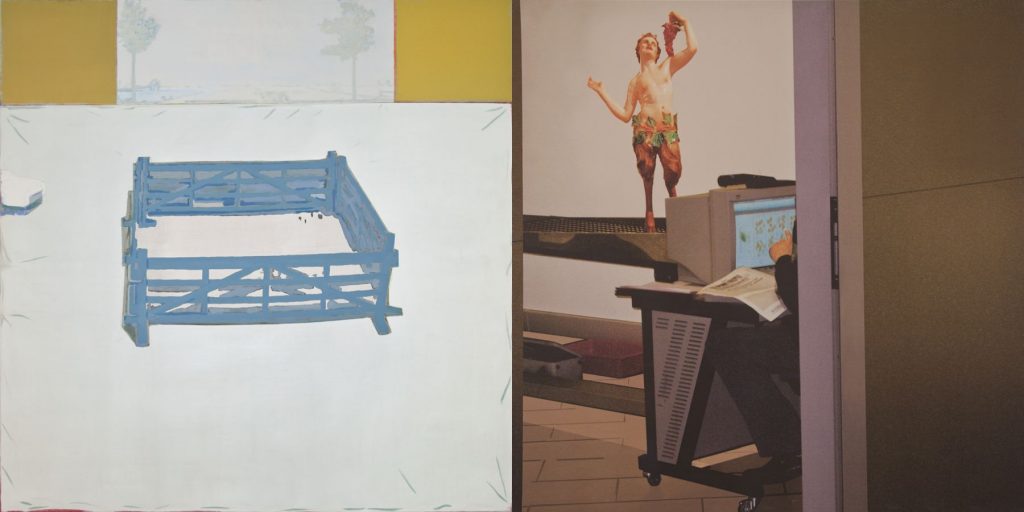 The left canvas focuses on a large blue wooden corral. In the far corner of this secure but blunt enclosure a gathering of individuals takes place on a trampoline stretched to the edges of the canvas, suggesting the encounter might have its ups and downs. The background is made up of a couple of trees bordering on some farmland. To either side are two ochre-colored walls.

To the right we’re looking through an open door at an airport security officer operating an X-ray inspection post. A handsome celebrating satyr dances on the conveyer belt just before being scanned and inspected by the agent pointing at a computer screen.

Satyrs are known for their lust for wine and tempting young female nymphs. They let instinct take precedence over reason, anarchy over order, ecstasy over asceticism. They symbolize lust and delight, like the female followers of Dionysus, the Maenads.

More than 65 million people travel through Amsterdam Airport every year. Mobility is one of the achievements of Occidental society; more recently followed by upcoming economies like China, India, and several South American countries.

Since 9/11 in 2001 they turn you inside out at airports and bringing fluids, scissors, or a small pocketknife is out of the question. For security reasons governments worldwide have taken extreme measures such as full body scans at airports, tapping phones, hacking computers, placing video surveillance cameras everywhere, etc. Big Brother is watching us now for our own safety. Individuals and society are paying with personal privacy, an asset that is rapidly disappearing.