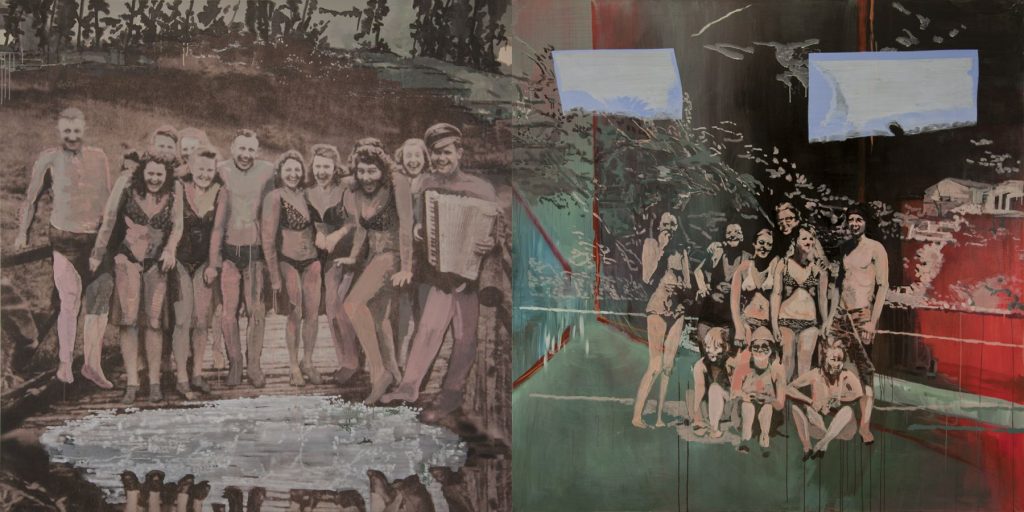 Two groups of happy people pose while their picture is being taken somewhere in the countryside.

To the right is the Schuitema family on a holiday on the island of Corsica in 1976 – an exceptional destination at the time. Several friends joined the celebrating family, as did Marcella, the artist’s wife, best friend to daughter Alies Schuitema. They camped out in a eucalyptus forest at the beach for three weeks. In the picture the two girls are standing on the left.

The other party with men and women, doubled up with laughter, happy to be photographed in their swimsuits, is taking a break from work in a nearby concentration camp. Officers of the SS and Helferinnen are standing on a wooden bridge across the river Sola in Poland, 30 km south of Auschwitz, in 1943. Despite their outfits and mood the lineup still looks like the hierarchy amusing itself with the girls. Not everyone seems to be feeling completely at ease, but other than that it is business as usual.

This work connects to the ideas of Hannah Arendt in Eichmann in Jerusalem: A Report on the Banality of Evil, 1963. Arendt argued that very well-organized totalitarian regimes deprive their citizens of their morality and intentions and thus of their thinking. She insisted the term ‘Thinking’ had to be reserved for a more reflective mode of rationality and feared that non-thinking had become ‘banal’; in other words completely unexceptional. The fact itself was not considered banal at all, but unprecedented, shocking and wrong. Arendt never denied that Eichmann was an anti-Semite and held him fully responsible for his actions, but argued that all these characteristics were secondary to stupidity. In 1962 Eichmann was hanged in the prison of Ramla, Israel, with Arendt’s approval.