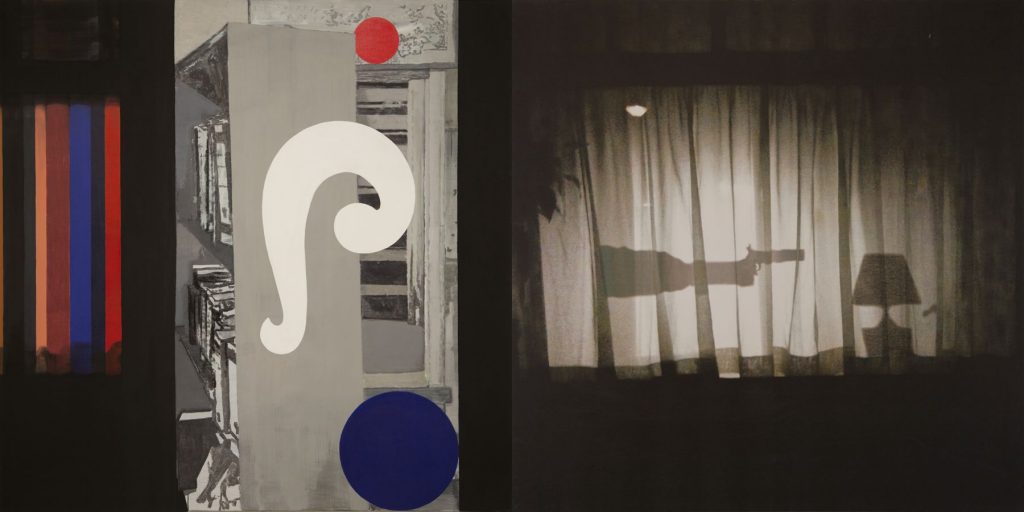 A bookcase leads to a staircase up to the hiding place of the Frank family, the Van Pels family, and Mr. Pfeffer. Hiding at the Prinsengracht in Amsterdam they were betrayed in September 1944 and sent to Auschwitz. Only Otto Frank came back from Germany.

Still unknown who amongst the neighbors denounced the Frank family, some historians believe the two families wouldn’t have survived the cold winter months due to hunger. This is a comforting thought for a lot of Dutchmen, while a good number of people turned a blind eye to the situation of the Jews.

This canvas is almost equally divided between obscure and visible. Half-revealed behind two dark panels, we can discern an interior scene with a bookcase and an entrance through a wall. Three floating forms exist in an undefined space; these are in the colors of the Dutch national flag.

To the right we have a silhouette view through a curtained window of an arm and hand brandishing a revolver pointing at an unlit lamp. The narrative sense leads us to imagine that a victim is absent from our view.

From 1933, the year Hitler gained power in Germany, the Amsterdam Rivierenbuurt neighborhood was called ‘Little Germany’ as the majority of the residents consisted of German Jewish refugees. The observation through this window in the neighborhood at night must have been a regular one during the first three years of the war, since Amsterdam was already officially declared free from Jews by 1943.