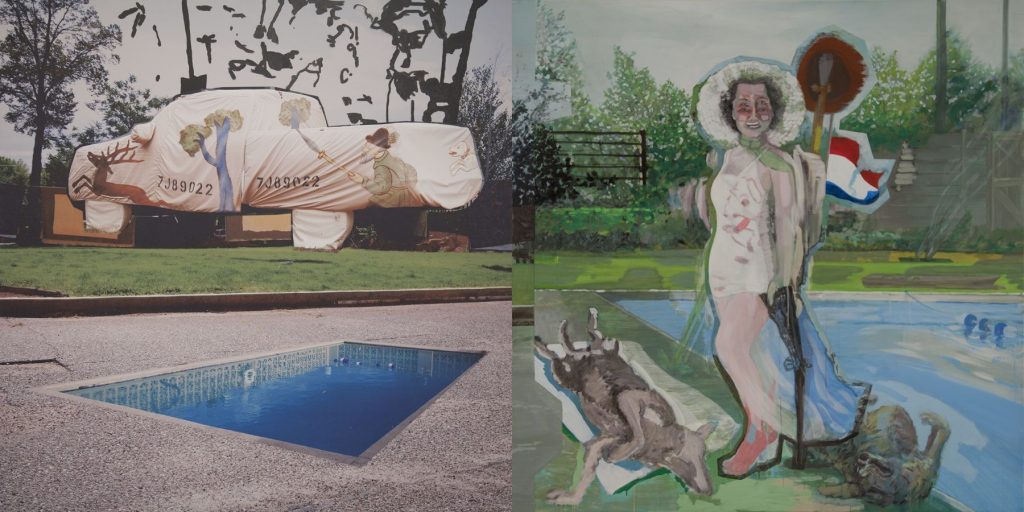 Both panels feature a swimming pool; the one to the left sunk into a parking lot. A long-term parked pickup truck hangs above the street. The car looks like a cardboard cutout. An old army tent is wrapped around the truck as a second skin. It shows a medieval hunting scene of a deer being chased by a hunter and his dog.

Next to the other swimming pool a wealthy woman in a fancy outfit poses in her backyard, holding a rifle in her hand like a walking stick. The woman also looks like cardboard cutout. The same dog from the scene on the army tent appears on the lady’s bathing suit. She is clearly a dog lover with the two dogs rolling over at her feet. Together with a backpack and flag she’s carrying the hunter’s spear topped with his hat.

What is she up to, is she on the move? As a cutout she’s not going anywhere by herself. Looking at her face you could conclude there is more to her than meets the eye. Although both panels represent modern scenes of wealth and leisure and violence to nature, her bathing suit might be made of re-used army tents. Extremes are usually united in one and the same person.