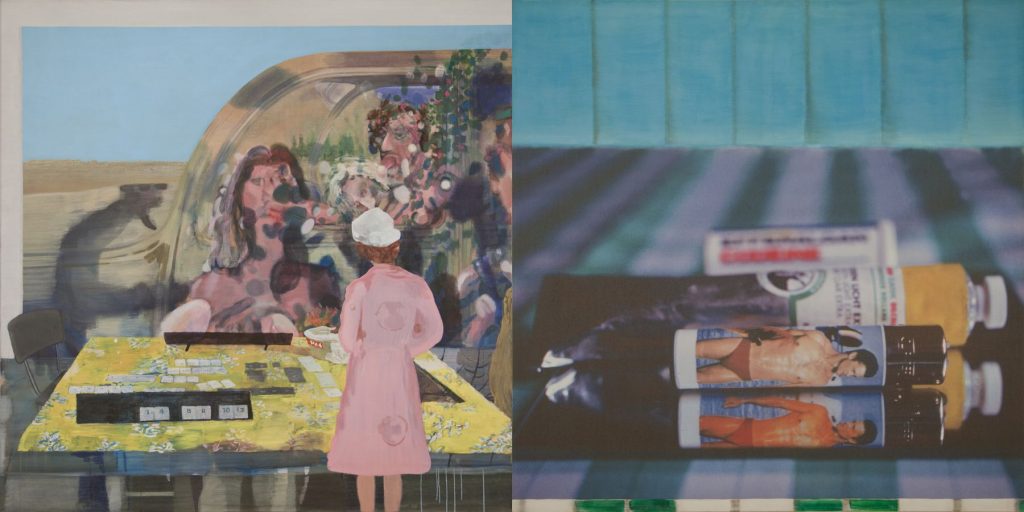 A prospective college student from the suburbs of New Jersey, which he always referred to as ‘the Junk Food Capital of the World’, broke his back in Florida when he was 17. He fell backwards from a second floor window – lucky to be alive. The accident meant a radical change to his life and it still does now, some fifty years later.  He decided to become an artist at one point, lucky for Smit, otherwise they would never have met at the University of Massachusetts and maintained a 30-year friendship.

How much in life depends on chance? Is life just a game determined by luck? Few people realize that contrasting concepts like coincidence and luck versus faith and destiny, like good and evil or life and death are extremes in the same field of play.

This fragile older woman to the left looks across a bright yellow table where a game is being played, although nobody is present at the table. The ghostly pink figures in the background are from a canvas in progress in the studio.

There is a sterile kitchen table, a mirror doubling a cigarette lighter decorated with a metrosexual man with a perfect body and a tube of Old-Dutch oil paint next to a container of codeine pills. Plain objects for an artist in a fully-staged world.