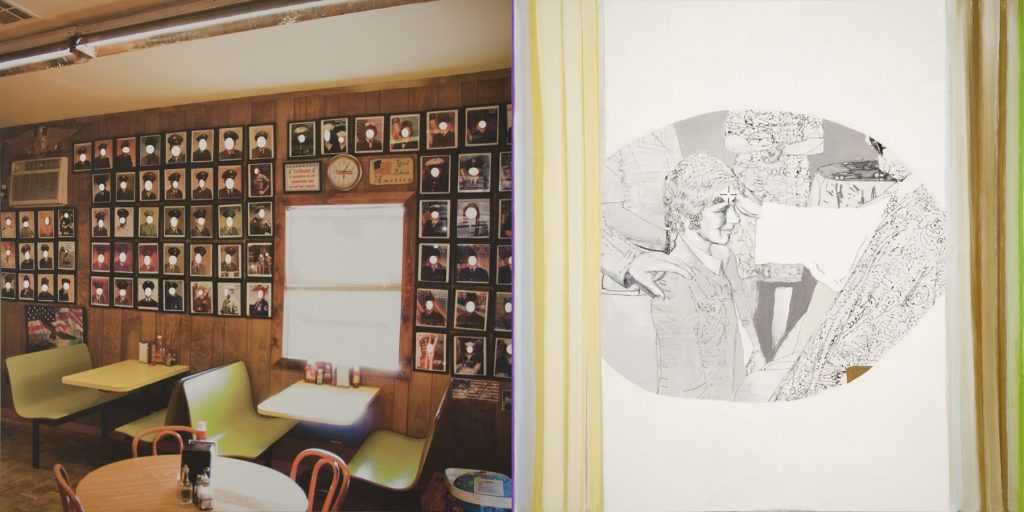 A diner in southern Louisiana is flooded by late afternoon sunlight. It feels as if God is peeking in, giving the whole interior a golden glow. On the wall there is a collection of commemorative photographs of men and women who served their country in wars fought around the world since the Second World War. Their faces replaced by white circles. For family and friends it is without a doubt horrendous to see their loved ones be impersonalized like this; but it seems to be one of the characteristics of modern warfare.

In 1976, the artist is receiving the sacrament of Confirmation from the Bishop of Haarlem, Mr. Schmidt. His parents are standing behind him. During the ceremony cross hairs show up on his forehead in the same spot where the Bishop puts a Christian cross with consecrated myrrh oil.

Born a catholic the artist got his religious education at school since the family rarely went to church, except for special occasions such as Christmas and Easter. To integrate into the church community the artist played cymbals in the school band and he was a cloud, walking the stage from the left to the right with a cardboard cloud in front of his face, probably announcing the next biblical disaster. In the Netherlands fifty percent of people are religious, the other half are atheists, but they all deal with themes like faith, obedience and sacrifice.