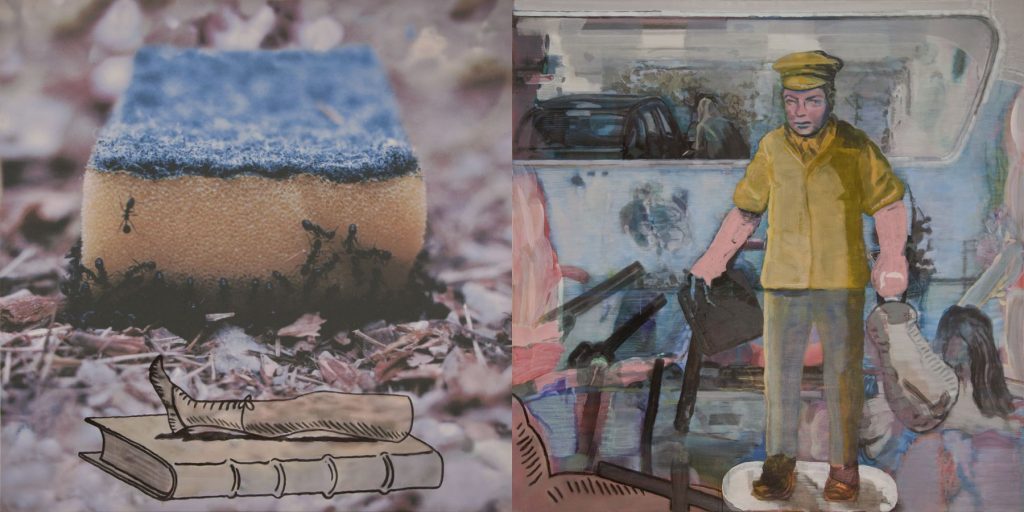 Ants have found refuge under a yellow and blue scrubbing sponge. The water from the sponge has helped them survive the summer heat in the south of Tuscany, Italy. A woman’s leg on an antique book floats by in silent serenity.

The delivery man in a yellow uniform, a bag in the shape of a raw ham in one hand and a folder in the other, finds himself in front of a rearview mirror, grounded on his white little platform. He serves as a mascot, as a ‘non’-walking gentleman; a silent but forced witness to an obscure scene inside and outside the car.

Both panels, clearly related by the use of similar color palettes, demonstrate a group process social psychologists call social facilitation or the audience effect. It describes a tendency of people and animals to perform differently when in the presence of others as opposed to performing a task when alone. The presence of others simply observing or carrying out the same task increases an organism’s ability to perform habitual/well-learned tasks. By contrast, situations of heightened observation act as an impediment when performing complex/unfamiliar tasks.

Unfortunately the undesired reaction is a very dominant feature of a difficult task.