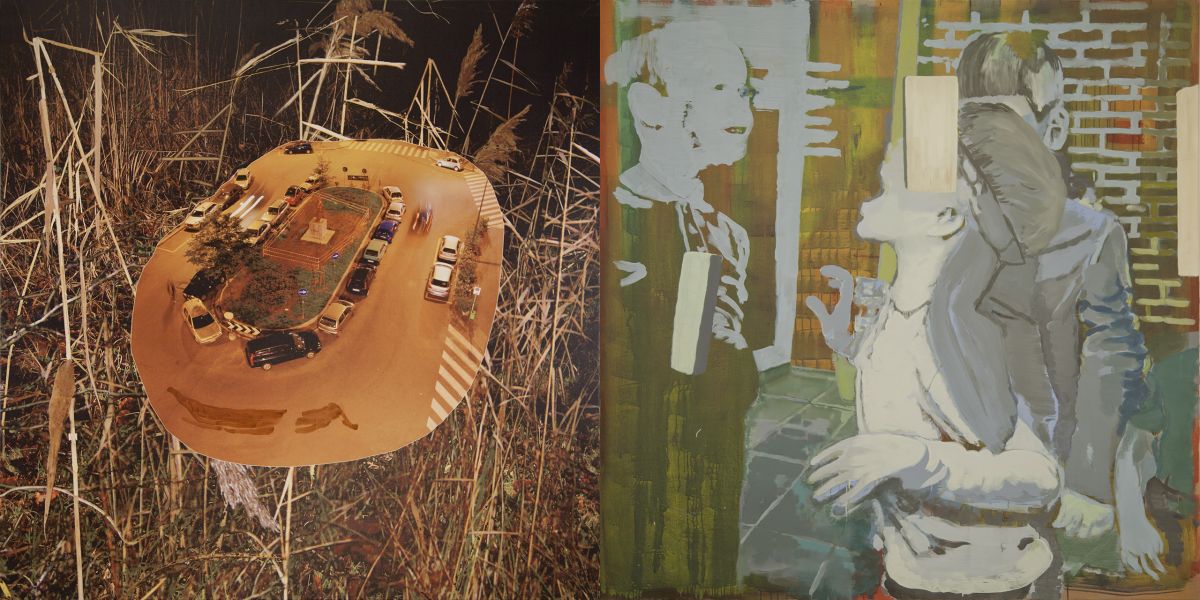 On the South side of Amsterdam is De Oeverlanden, a landscaped park situated on the shores of Lake Nieuwe Meer. The park forms a ‘natural’ habitat for migrating birds, wild aurochs, inhabitants of the city seeking recreation and two long-standing artist communities. At night the place is usually abandoned and then nature gets time to recover from all the human activity.

In Cookies the left side panel is a lighted segment of the grounds of the park. Hovering above this field of reeds is an image of a square, used for nighttime parking. There are still a few signs of activity in the oval square, two cars and a pedestrian move around a central monument representing a human figure.

Combined with the De Oeverlanden landscape is a painted scene with several children. A blindfolded boy attempts to trap a slice of gingerbread suspended before him without using his hands. This is a traditional Dutch birthday game. He is being watched by an excited friend with what looks like a deformed eye. The boys are painted in graded shades of white and gray against a background painted in muted colors that often drip down the surface of the canvas. Again a biographical scene featuring the Smit brothers. It’s the artist himself celebrating his 5th birthday. The boy who lives next door is completely focused and physically trying to assist his friend. He is so excited that his left eye almost drops out. Despite his instincts he manages, with difficulty, to restrain himself by keeping his hands behind his back. At this age children still consider themselves an inseparable part of the world.