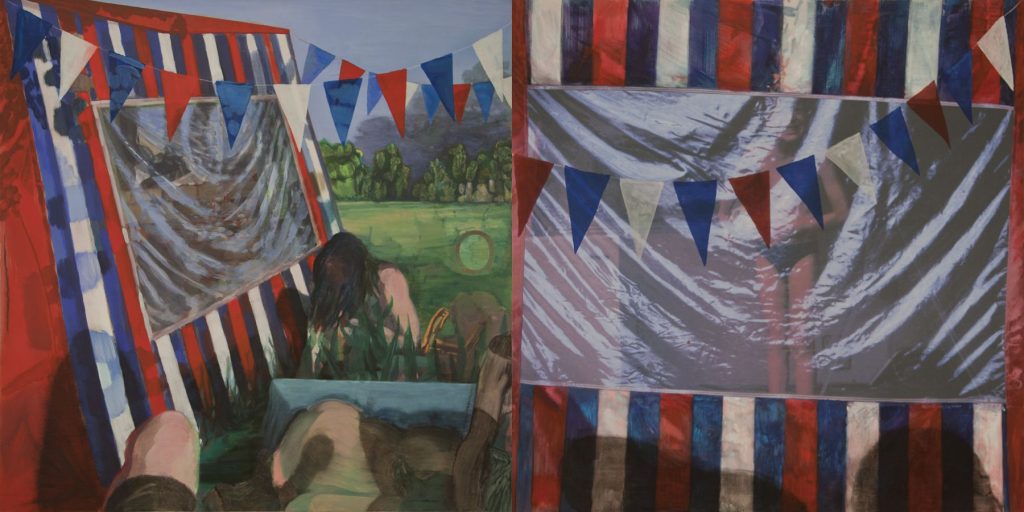 Dutch family camping installations often become a copy of their situation at home.  Campgrounds occupied by typical Dutch families are not only a physical copy of home but a mental one as well. Today’s Germany is one of Holland’s most favorite holiday destinations.

A typical ‘bungalow tent’, as it is called, takes up seventy-five percent of this diptych. The tent’s fabric is covered in red, white and blue stripes representing Holland’s national colors. The colored triangular banners also indicate a period of celebration. They try to cheer up the site but apparently do not succeed. Far off in the background signs of an approaching storm seem present. Meanwhile in the foreground, beside the pitched tent, the scene and atmosphere become a twilight zone for obscure after-party activities involving a naked female in a squatting position who is being observed by what is clearly a male figure.

The canvas to the right illustrates what could be a typical family snapshot of a happy camper. We see a young boy with a football under his arm standing behind the tent window either laughing or presenting a fixed grimace. Dutchmen are the champion campers of the world. Most Dutch campers prepare their vacation in detail and make their stay away from home as cozy and comfortable as possible.