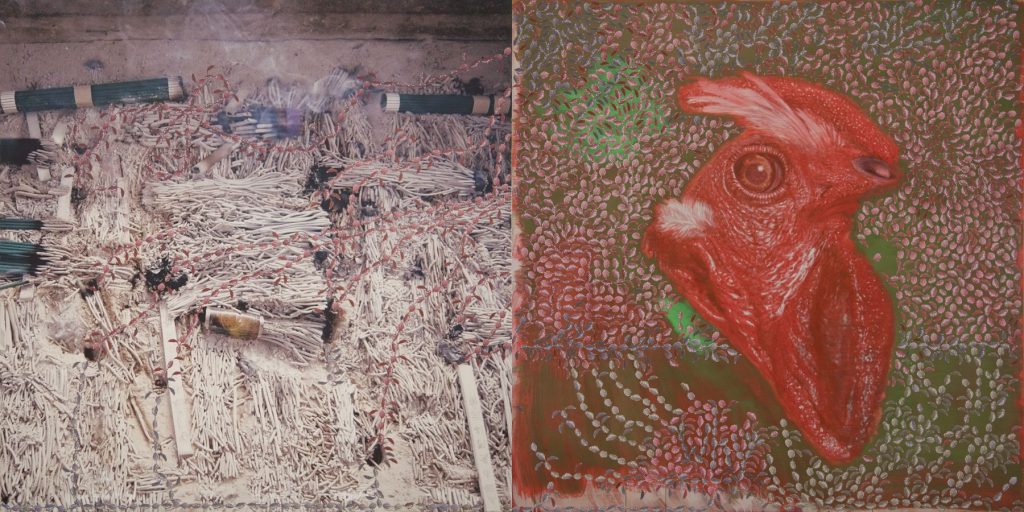 A memory of the past accompanied by a glance into the future, a rare situation saying this is now.

This overhead view of a Japanese Memorial altar covered with offerings of incense recreates the same kind of atmosphere as images of devastated cities like Dresden, Aleppo, or Mogadishu. Both deal with the loss of loved ones and the remembrance of them. Some structures are still standing; others have burned down and collapsed.

Superimposed over the burned remains are a multitude of minute red and gray leaves that emerge from dark holes. The red ones move upwards while the gray ones move down to the limits of the canvas. They all move over to the right panel, much like birds that know where to migrate instinctively without hesitation.

The leaves, arriving over a green and red background, surround an animal, a chimaera that seems to be a combination of a rooster looking to the right and a rabbit looking to the left, with a white feather on its nose.

Are we looking at a top-secret government experiment in a university laboratory or are we seeing a new breakthrough in cloning that has developed a new product for commercial purposes? The work’s overall color palette of light-blue, gray, green and red is also familiarly linked to operating rooms where scientific progress is everyday business. It probably won’t take long before you can order a new leg, artificial organs or other yet to be imagined extras.