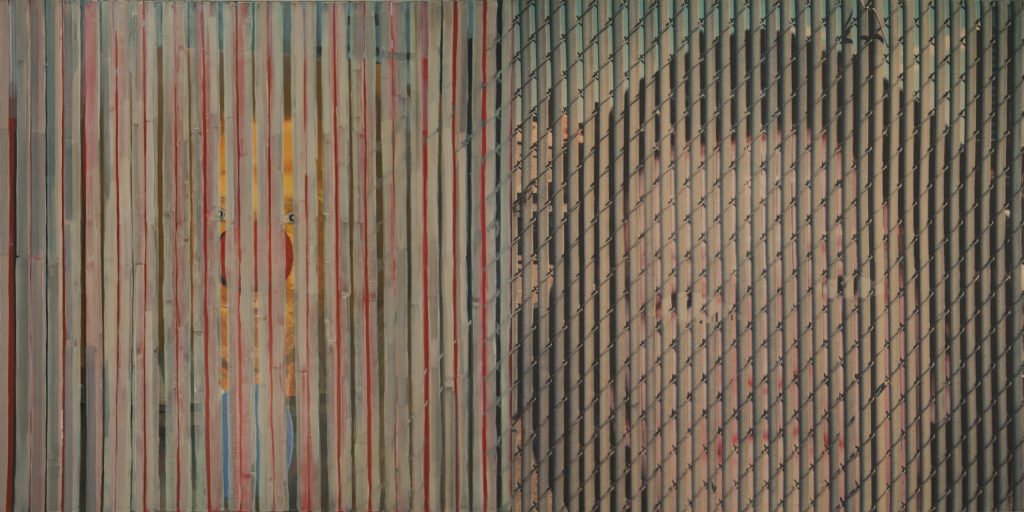 A double portrait of the artist and his wife, Marcella van Zanten, placed behind a fence, originally from a New York parking lot. The slats of the fence, becoming more and more abstract to the left, work like a screen; almost totally obscuring the personages and thereby causing an optical illusion.

The overly large red nose, yellow complexion and blue oval form suggest that the left portrait represents the face of a clown with little else present. The fence has been designed using red and gray striped bands, spaced in vertical positions.

With the portrait of Mrs. van Zanten the fence is a chain-linked fence made by interlacing metal wiring that creates a habergeon; proven to be malleable and resistant but hiding most of her identity. She doesn’t seem to be disguised in any manner. The sky is blue behind her and to the left is a suggestion of village housing.

The couple looks straight at the observer. Mrs. van Zanten’s eyes even seem to be looking straight through the barrier. In a strange way, the eyes appear in front and behind the barrier at the same time; possibly referring to the demonstration of a special gift that comes with an open attitude. The artist, on the other hand, plays the role of a clown being interviewed but not saying anything.